The Axiom IFS Update – As USD Weakens Entering A Data-Heavy Week Will GBP And Euro Be Able To Consolidate Their Recent Gains? 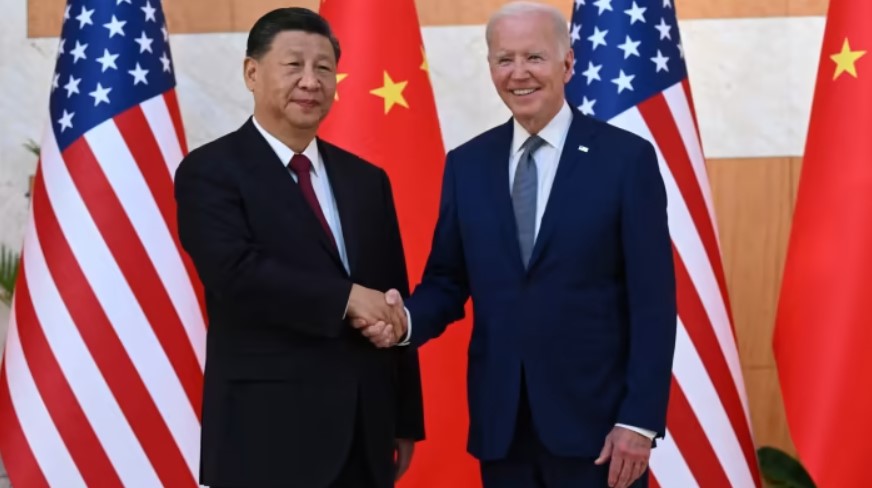 The geopolitical roadshow moves from the beaches of Sharm El-Sheikh to the beaches of Bali for this week’s G20 meeting where Presidents Xi and Biden meet face to face for the first time as leaders of their respective nations.

The surging US stock market and fall in the dollar was sparked by a surprise undershoot in domestic inflation data that setup markets for a huge move. Over the weekend some Fed officials took to the airwaves to dampen expectations that next month’s interest rate decision will now be lower than expectations. This week data from the UK may define the short-term outlook for sterling. Jobs and inflation data is released before the Chancellor’s autumn statement on Thursday. Tax rises and spending cuts were well trailed in the weekend’s newspapers so we wait to see how far, how much and when – with a general election due before January 2025 any spending of tax commitments falling in the 25/26 fiscal year and beyond may well be disregarded by the markets.

The pound outperformed towards the back-end of last week despite data confirming the bleak UK economic outlook. Given the magnitude of the GBP rally, even in relation to the euro which also led gains amongst the G10, the pound remains vulnerable to a large retracement in the early parts of this week as the cross-asset risk rally fades. Comments by UK Chancellor Jeremy Hunt over the weekend regarding a universal increase in taxes to fill a widening fiscal deficit are likely assisting the volatility in the pound this morning too as they underscore the precarious position the UK economy finds itself in. Ahead of Thursday’s Autumn budget, markets will receive an update on the current state of the UK economy as labour market data for September is released tomorrow morning and inflation data for October is released Wednesday morning.

After falling 3.65% to lows last seen in mid-August in the 36 hours following October’s CPI report, the dollar is stabilising this morning as Fed commentary over the weekend looked to cool market expectations of an immediate pivot in US monetary policy. The most impactful comments came from high ranking FOMC official Christopher Waller who stressed that Thursday’s inflation report was one data point and that the market shouldn’t get ahead of itself when speaking overnight at a UBS conference in Sydney. Waller’s commentary follows that from Mary Daly in the FT over the weekend, which reaffirmed Chair Powell’s comments on November 2nd that markets should focus on the level of rates as opposed to the speed in which they are now increased, suggesting a downshift to 50bps in December isn’t indicative of the Fed’s fight against inflation ending. With Fed officials looking to push back on the easing in financial conditions caused by the weaker dollar and equity market rally in response to the latest CPI report and the repricing in financial markets proving to be historically aggressive, the dollar is likely to retrace in the near-term until more data supports a secular decline.

The single currency’s surge back above parity last week was extended by the risk-on rally post US CPI. With expectations of the Fed’s hiking cycle moderating as core inflation pressures ease, and still hawkish rhetoric from ECB officials, the narrowing in interest rate differentials between the US and the eurozone is helping the euro to consolidate at levels last seen in mid-August. Although the data calendar is fairly light for the eurozone this week, it is full with ECB speakers. Today, Governing Council members Panetta, Centeno and de Guindos are set to take centre stage, with commentary about the ECB’s next steps and market pricing likely following de Guindos’ comments last week that markets have overreacted to the miss in US inflation data.

In line with the broad G10 move, the Canadian dollar rallied against the greenback following October’s CPI report. The loonie notched gains in excess of 2% to climb to a fresh 2-month high, aided by hawkish comments from BoC Governor Tiff Macklem on Thursday afternoon. Speaking at a press conference in Toronto, Macklem told reporters that “interest rates do have further to go” and that it could mean “another bigger-than-normal step” in December. Wednesday’s release of October’s CPI report, the last inflation reading before December’s meeting, will therefore be influential for BoC rate expectations which currently price in a roughly 40% chance of a second 50bp hike. Prior to the inflation release, downside in the loonie is likely as Fed officials push back on the recent risk rally and still weak Chinese data for October keeps oil capped below $90 per barrel.

The world’s second-biggest buyer of gold among central banks last quarter believes there’s hardly such a thing as too much bullion. Uzbekistan has brought the share of the precious metal in its $32 billion reserves to almost two-thirds, in a reversal of a plan to cut it below 50% by buying US and Chinese sovereign debt.

US stock futures declined on Monday morning and Treasury yields rose as a cautious tone from a Fed speaker tempered some of the ebullience that inflation may have peaked. Contracts on the tech-heavy Nasdaq 100, typically more sensitive to interest rates, slipped 0.7% while those on the S&P 500 dropped 0.4%. Losses in New York premarket trading were concentrated in tech names, with Tesla, Nvidia Corp., Intel Corp and Micron Technology shedding between 1% and 2%. Europe’s Stoxx 600 benchmark rose to a near three-month high, and Chinese shares rallied for a second day on hopes the country’s Covid zero isolation would soon end.

Cryptocurrencies fluctuated while the sector remained under pressure amid FTX’s deepening woes. A swift plunge in the value of FTX’s key crypto assets and unauthorized withdrawals of funds after it filed for bankruptcy suggest customers have little chance of recovering much of their deposits.

Oil switched between gains and losses, as the market remains caught between the outlook for global growth and China’s easing of Covid restrictions. WTI and Brent futures traded near $89 a barrel and have been in a range of just over $10 for the last month. The dollar rose for the first time in three sessions, making commodities priced in the currency more expensive, overshadowing expectations for a rebound in Chinese demand after the nation eased some of its strict Covid Zero restrictions.