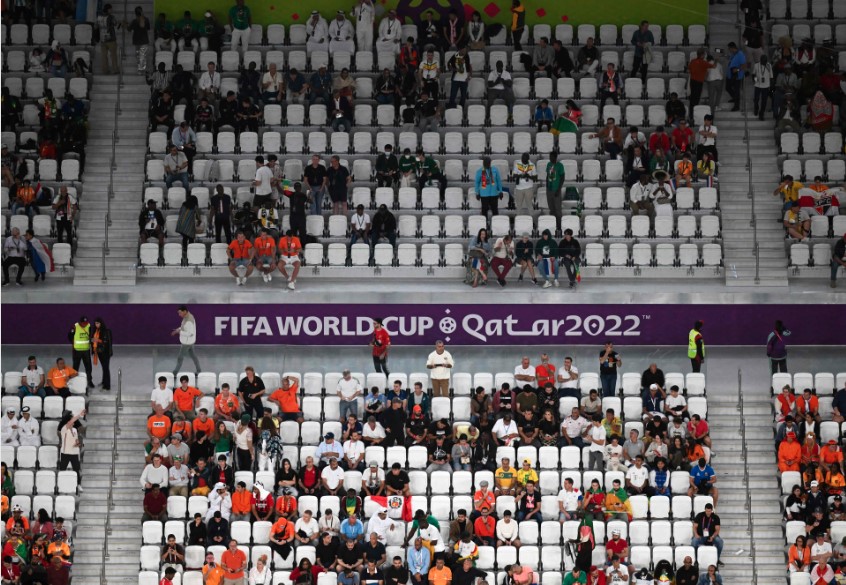 The 2022 FIFA Men’s World Cup has begun in Qatar. So far authorities report attendance figures for each match that are higher than the stadium capacity and in spite of the numerous empty seats during the matches.

Some predicted that we may have reached ‘peak dollar’ as the prospect of the Federal Reserve slowing the pace of the increase in interest rates and then stopping the raises altogether comes into view. If inflation has already begun to decline then the main impetus for the interest rate increases will be reduced and the dollar should become less attractive. However we must not forget the safe haven effects and rising COVID-19 cases in China threaten the prospect of further lockdowns in major conurbations with potential for supply chain disruptions that will ripple across western economies. The shift in the market focus from China’s growth outlook back towards easing pressure from Fed policy highlights the precarious macro environment.

The U.K. reported smaller than expected public sector net borrowing for October; a welcome surprise after Chancellor Jeremy Hunt last week announced tax hikes and spending cuts to fix the country’s balance sheet. However, the British pound started the week on the back foot following a surge in COVID cases which prompted a race towards the greenback . In fact, the sharp sell-off of the US Dollar last week seems to have subsided. Ultimately, renewed gains versus GBP are certainly plausible after a renewed risk averse mood as well as U.K.’s Autumn Statement which highlighted a macroeconomic outlook considerably worse than elsewhere.

The U.S. dollar gained in late European trade yesterday, as worries that the escalating COVID situation in China would stunt the global economic recovery prompted safe haven flows. In fact, the Dollar Index, which tracks the greenback against a basket of six other currencies, gained 0.8% overnight and was last seen at 107.50, the largest daily gain since November the 3^rd. Yet, despite these dollar gains, many analysts think the dollar’s strength may now be short-lived. Timing the peak of USD is not straightforward, but on balance, the USD will crest as and when there is more clarity on the Fed’s terminal rates. Ultimately, the Federal Reserve will publish the minutes of its November meeting on Wednesday, and this could provide more clues over whether policymakers may now be considering slowing the tightening process.

European stock markets opened marginally lower this morning as a surge in COVID cases in China weighed on growth expectations for the world’s second-largest economy. This has sparked concern that the country could see a return of widespread mobility restrictions, weighing on economic activity in the region’s main growth driver and a major export market for Europe’s companies. At the same time, inflation in the Eurozone soared past 10% at the end of last month, up from 9.9% in September, which will see the European Central Bank continuing to hike interest rates, weighing on economic expansion in the region. Ultimately, the ECB has ratcheted up rates by 200-basis points since July, and another increase is widely expected in December.

Trading in the Canadian dollar was fairly benign for most of Monday’s session, but there were two brief flashes of excitement. Two hours after North American markets opened, news that Saudi Arabia was looking to produce 500k more barrels of crude oil per day sent the price of WTI crude sharply lower to $75 per barrel. The loonie, which is hindered when oil prices are low, immediately woke from its slumber, selling off in tandem. After a three-hour lull, the newswires started buzzing again. Saudi officials disputed the notion that they wished to increase the supply of oil, saying that they were prepared to do the reverse if needed to support oil prices. Within moments, oil was back to $79, while the loonie pared back the losses it sustained following the initial oil news. The rest of the day was quiet, and the loonie resumed its prior trend, gradually weakening until markets closed.

European shares advanced, boosted by oil majors as crude prices recovered. US futures gained as investors parsed comments from Federal Reserve officials to assess the potential for slower interest rate hikes. The Stoxx Europe 600 Index climbed 0.7%, with Shell Plc and BP Plc among the biggest drivers of the gains. Contracts on the S&P 500 and the Nasdaq 100 were both higher, reversing earlier losses. In US premarket trading, Zoom fell after reporting slower sales and trimming its full-year revenue forecast. In Asia, a gauge of the region’s equities was off its intraday highs as stocks in Hong Kong slid with China’s daily virus infections climbing to near the highest on record. Covid-control restrictions now affect a fifth of China’s economy.

An FTX Group bankruptcy filing showed that the fallen cryptocurrency exchange and a number of affiliates had a combined cash balance of $1.24 billion.The document from the proposed financial adviser to FTX said trading house Alameda Research and related firms had a cash balance of almost $401 million. Sam Bankman-Fried’s FTX empire slid into a chaotic bankruptcy on Nov. 11, potentially leaving more than a million creditors and fomenting turmoil in the crypto sector. Earlier court papers showed that FTX-linked entities owed their 50 biggest unsecured creditors a total of $3.1 billion. Preliminary filings have also indicated FTX assets and liabilities of at least $10 billion each.

China’s crude buyers have paused purchases of some Russian oil as they wait for details of a US-led cap to see if it presents a better price. Several cargoes of Russian ESPO crude for December-loading remain unsold and there’s hesitation among sellers and Chinese buyers to close deals before more clarity on the exact price cap level is known, according to traders with knowledge of the matter. More details on the measure are expected soon. The price limit is set to be implemented alongside European Union sanctions on Russian crude on Dec. 5, with those adhering to the measure gaining access to insurance, banking and shipping services from the bloc. The cap is designed to keep crude flowing from the OPEC+ producer to prevent a global supply shock but crimp the Kremlin’s revenues as it wages war in Ukraine.