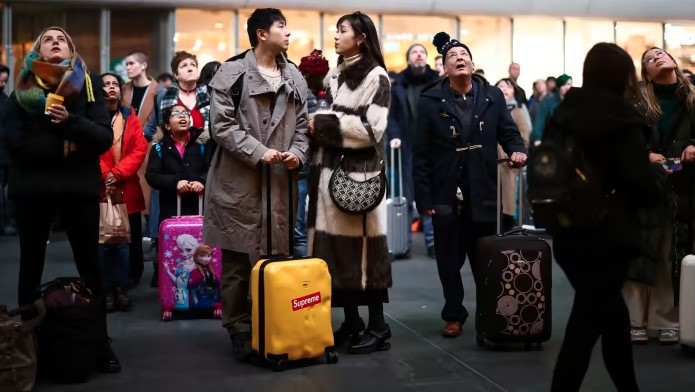 Train passengers face another week of chaos on Britain’s railways as the series of bitter and long-running industrial disputes drags into the new year and looks set to disrupt the return to work after the Christmas holidays.

The UK will face one of the worst recessions and weakest recoveries in the G7 in the coming year, as households pay a heavy price for the government’s policy failings, economists say. A clear majority of the 101 respondents in the FT’s annual poll of leading UK-based economists said the inflationary shock caused by the pandemic and the Ukraine war would persist for longer in the UK than elsewhere, forcing the Bank of England to keep interest rates high and the government to run a tight fiscal policy. More than four-fifths expected the UK to lag its peers, with GDP already shrinking and set to do so for much or all of 2023.

The Pound failed to gather strength on the final trading day of 2022, and investors found very little to cheer for in 2023 as the myriad of headwinds look set to continue. In fact many analysts have said that the cost-of-living crisis has been far worse than any year in the pandemic or the financial crisis, and fully expect this year to be the same. Further weighing on the UK economy, and in turn the Pound, is a fourth straight month of declining house prices. This reflects the longest run of slumping prices since 2008, and market analysts are fearing that house prices could continue to plummet as much as 10% over the next two years. Ultimately, the Pound may find it difficult to muster much strength amidst the maelstrom of headwinds keeping it under pressure as prolonged industrial action and downbeat economic forecasts could limit any gains.

The US Dollar continues its hot streak as it starts the year with a positive push. In fact, the dollar edged up yesterday, pulling away from recent six-month lows against a basket of major currencies. However, sentiment remained fragile and the first trading day of the year was subdued with many countries including big trading centres such as Britain and Japan closed for a holiday. Nevertheless market participants will be looking ahead to a busy week of economic data and the release of the U.S. Federal Reserve’s latest meeting minutes. Today’s attention will be looking towards the S&P Global manufacturing PMI and construction spending, JOLTS data, as well as the minutes of the Fed’s latest policy meeting. Later in the week, ADP non-farm employment and December’s nonfarm payrolls report will also be closely watched.

European shares extended their run this morning as investors await consumer prices data from Germany, the region’s largest economy, for clues about inflation in the euro zone. In fact, investors are focussed on Germany’s CPI data that could offer more cues on whether cost pressures in the euro zone have weakened after the European Central Bank’s aggressive monetary policy tightening path. For now, German consumer prices, harmonised to compare with other European Union countries, are expected to have risen by 10.7% on the year in December in the preliminary reading, compared to an 11.3% increase in November. Ultimately, although the euro area economy is heading for a recession, concerns about gas supply over the winter have eased, meaning a downturn may not be as bad as feared a few months ago.

The Canadian dollar broke out of its post-BoC range in the final trading week of 2022 to the upside. This left the loonie as one of the better performing G10 currencies against the dollar, although its position at the top of the G10 currency board up until Q3 2022 was lost to the Swiss franc. While the Canadian dollar still acts as one of the more defensive currencies against broad USD strength, exemplified in this morning’s price action, the turn in the broad dollar in Q4 meant that the loonie’s fortunes turned with it. This week it is all about Friday’s labour market data. After hiking rates by 400 basis points in 2022, the Bank of Canada is still optimistic about achieving a soft landing this year.

Gold prices jumped more than 1% to a six-month high on Tuesday on technical trading, while investors looked forward to minutes from the U.S. Federal Reserve’s latest policy meeting for more cues on its rate-hike path.

The regional Stoxx Europe 600 gained 1 per cent, extending gains from an upbeat 2023 debut the previous day. London’s FTSE 100, which was closed on Monday, kicked off the year by rallying 2.1 per cent in early trading. Contracts tracking Wall Street’s benchmark S&P 500 and the tech-heavy Nasdaq 100 both rose 1.1 per cent ahead of the New York open.

Caroline Ellison, a former close colleague of Sam Bankman-Fried, said she and the FTX founder hid the fact that they were using customer deposits from the cryptocurrency exchange to make “illiquid” investments that were later blamed for the company’s collapse in November. Ellison, the former head of FTX’s trading affiliate Alameda Research who pleaded guilty to seven criminal charges on Monday, told a New York judge that from 2019 to 2022 the firm had access to “an unlimited line of credit on FTX.com” and that she “knew that it was wrong”, according to a transcript of the plea hearing made available on Friday.

Oil climbed in the year’s first session as traders digested mixed signals on demand from China, the world’s largest crude importer. WTI rose toward $81 a barrel after capping a modest annual gain last week. In China, some measures of mobility in key urban areas have picked up, a sign that a so-called exit wave of Covid infections may have peaked.