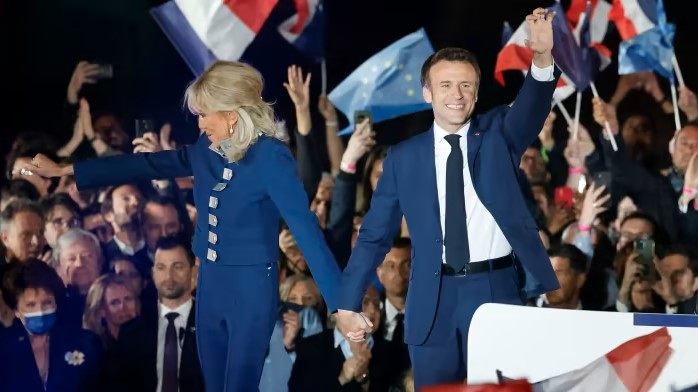 Central Banks and their policy choices once again dominated the currency markets last week and will continue to do so as we edge closer to their next meetings. With interest rates set to rise worldwide speculation is rife on the quantum of the rises. The most aggressive stance is still being taken by the US Federal Reserve, which continues to say nothing to dissuade investors from anticipating successive increases of 0.5% at their next two meetings and, if some analysts are to be believed, possibly by more. The derivative markets are now pricing in no less than nine back-to-back rises of at least 0.25%. In contrast the Bank of England is sounding almost dovish and in the face of gathering problems for the UK economy this may be prudent. Last but by no means least, even the European Central Bank is now hoping to raise rates by 0.75% by the end of the summer.

The euro initially bounced before giving back most of its gains on the news that Emmanuel Macron was comfortably re-elected on Sunday after gaining nearly 58% of the vote in the Presidential Election. With the French Presidential elections settled a European embargo on Russian oil is more likely which will cap any advance by the single currency. The week ahead is bereft of important economic data until the end of the week when inflation in the eurozone and GDP in the US is released. With a dearth of financial data speculation over the war in Ukraine will play a more significant role in the markets and the euro will be on the frontline as it feels the impact of slowing economies, dropping consumer confidence and rising energy costs. Also fighting for attention will be the bond markets which after a week of rising yields may continue to undermine confidence in the equity markets, which could lead to a further search for safe-haven assets. All in all, a challenging week ahead for the euro and the pound was possibly made worse with month-end volatility exaggerating movements.

GBPUSD is extending its slide this morning to slide fall further to levels last seen in September 2020, as the risk-off market mood and hawkish Fed expectations are propping up the US dollar. Friday’s poor retail sales and PMI data aren’t of much help to the pound either, however, the data also didn’t lead to a significant repricing of Bank of England tightening expectations. Markets continue to price in six more 0.25% rate hikes by the end of the year despite broader downgrades in UK growth expectations over the last months, as in comparison, the UK economy is more resilient to the fallout from the war than other European countries. Still, risks of a dovish repricing in the BoE rate remain ahead of next week’s Bank of England rate decision.

Risk aversion has largely dominated price action since the Asian session this morning, largely driven by increasing numbers of Covid-19 cases in parts of China, which is increasing concerns around wider lockdowns. This led to a broader rally in the US dollar, while sentiment was weak already as the war in Ukraine doesn’t look to ease. The U.S. announced new military aid for Ukraine and a renewed diplomatic push as Secretary of State Antony Blinken and Defence Secretary Lloyd Austin finished a visit to Kyiv. Additionally, US and EU officials are in talks over steps the EU could take to restrict crude oil imports from Russia, including a ban, a price cap, and a payment mechanism to withhold revenue that Russia has generated since the start of the war. The calendar for the US is light in the first half of the week, with US durable goods on Tuesday being the main release of note. Later in the week, US PCE, personal income, and spending data will be eyed. There will be no FOMC speeches ahead of next week’s Fed rate decision.

In line with our expectations EUR traders are ignorant of yesterday’s second round in the French elections: the possibility of a victory by far-right Marine Le Pen had not been priced into EURUSD as Macron’s chance of winning was high, while a relief rally also didn’t occur as political risks remain elevated until the legislative elections in June. This is especially the case as there is an unusual delay between the second round and the legislative election this time around, which increases the probability of the latter being used as a protest vote against President Macron. This would force Macron to compromise on his domestic agenda. The lack of bullish sentiment on the euro shows the plentiful downside risks to the euro area economy as the war in Ukraine doesn’t look to ease and is set to weigh on growth. The extent hereof and the European Central Bank’s response to this will continue to drive the euro going forward. Looking at today’s data, there is little on the calendar outside of German Ifo and a speech by ECB’s Fabio Panetta at 18:00 BST to shake markets.

Panic buying has gripped the Chinese capital as local Covid-19 cases rise and residents brace for a Shanghai-style lockdown. Beijing reported just 41 cases on Saturday and Sunday, but city health officials called the situation “grave” as evidence emerged of days-long community spread of coronavirus. Health officials said the Omicron variant was spreading through different transmission chains and ordered several neighbourhoods to lock down on Monday. Shoppers rushed to hoard supplies after the city’s largest district Chaoyang, with a population of 3.5mn, ordered residents to undergo three rounds of Covid-19 testing from Monday. Chaoyang is also Beijing’s main commercial area, popular with multinational corporations and home to dozens of embassies.

The lockdowns have dented the country’s economic prospects since mid-March, when restrictions in Jilin province were extended to dozens of cities. Despite the chaos and economic hardship stemming from the restrictions, President Xi Jinping has shown no indication of relaxing his zero-Covid campaign. “We will not waver in pursuing dynamic zero Covid,” Liang Wannian, a Covid-19 government adviser, told state media. “It maximises the safety of people’s lives and economic and social development.”

The Canadian dollar weakened by more than a percent on Friday, with USDCAD up three cents from the previous day’s low. The move was primarily driven by continued momentum in the broad US dollar following Fed Chair Powell’s comments that multiple 50 basis point hikes were possible. Risk sentiment and commodities also played a role in the loonie’s weakness. Risk sentiment deteriorated after global equity markets fell, with the S&P 500 down nearly 3% on the day, and VIX volatility index up over 30%, fuelling safe haven demand for the US dollar. Meanwhile, oil prices fell about 2.5%, further weakening the loonie demand. Friday’s CAD price action was largely in line with its G10 commodity currency peers of AUD and NZD. Similarly, this morning’s price action saw petro-linked currencies move in tandem as oil prices fell following increasing worries of a wider lockdown in China as cases start to rise in districts around Beijing and Shanghai. Today, Bank of Canada Governor Tiff Macklem will testify in front of a Parliamentary committee at 11:00 EST/16:00 BST.

Gold extended last week’s retracement slide from the vicinity of the $2,000 psychological mark and witnessed follow-through selling for the third successive day on Monday. This also marked the fourth day of a negative move in the previous five and dragged spot prices to a near one-month low, around the $1,912 region during the early part of the European session. The prospects for a more aggressive policy tightening by the Fed turned out to be a key factor driving flows away from the non-yielding yellow metal.

European stocks dropped as relief in a decisive victory for Emmanuel Macron in France’s presidential election was overshadowed by concerns about interest rate rises and the effects of surging inflation on corporate earnings. Europe’s regional Stoxx 600 share index fell 1.7 per cent in early trading, with similar drops for France’s CAC 40, Germany’s Xetra Dax and London’s FTSE 100. Chinese shares fell sharply while the renminbi lost further ground against the dollar as traders reacted to prospects of a harsh lockdown in the nation’s capital. The US S&P 500 share index on Friday registered its biggest one-day loss since March as traders anticipated central banks on both sides of the Atlantic would raise interest rates to curb inflation.

Bitcoin extended this month’s losses in Monday trade as investors shied away from risk assets amid a more hawkish outlook for Federal Reserve policy tightening. The largest cryptocurrency slid as much as 3.2% to $38,236, the lowest since March 15, and down more than 20% from last month’s high. The second-biggest coin, Ether, slumped as much as 4.8% to $2,799, a level not seen since March 18.

For all its recent losses, Bitcoin remains in the middle of a trading range that has held since the start of the year, between about $35,000 to $45,000. The digital currency moves strongly in line with the tech-heavy Nasdaq 100, and is negatively correlated with the dollar.

Oil fell at the start of the week on concerns that a spreading Covid-19 outbreak in top consumer China will weigh on global demand. WTI futures slid almost 5% to trade below $98 a barrel amid a rout in stocks and other raw materials. China’s travails with Covid-19 add another source of volatility to an oil market that’s been battered by the Russian invasion of Ukraine. The war has fanned inflation and the EU is discussing measures to restrict oil imports from Russia. The market is poised for additional supply, adding to bearish signs. Libya is expected to resume output from damaged fields in the coming days, while the CPC oil terminal on Russia’s Black Sea coast has resumed regular operations after one of two moorings damaged in a storm was repaired.